★★★★★ 'The play is a badass Ballon d’Or of authentic bravery.' Afridiziak

★★★★ 'As exhilarating a 90 minutes as you can hope to spend in the theatre… leaves you breathless.’ Time Out

★★★★ 'An absolute knockout.' The Upcoming

Stretch, squat, lunge, kick. Somewhere in Middle America, an all-girl high school soccer team prepares. A pack of teenage warriors ready for battle. All that matters is the win.

Sarah DeLappe’s award-winning play uniquely captures the essence of being a young woman today. The girls talk about everything from genocide and refugees to Harry Potter and tampons, wrestling with the big and small questions of our times.

Disarmingly authentic and fiercely funny, THE WOLVES is a portrait of self-discovery and ambition, speaking to the 16 year old in all of us.

The Wolves is presented by special arrangement with Samuel French Ltd.

Take a look at our blog to see what inspired THE WOLVES. 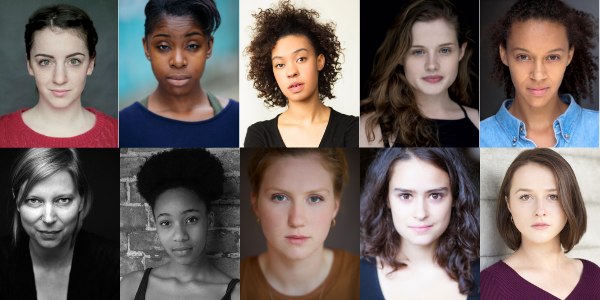 Francesca Henry plays #2. This is Francesca’s professional debut. She has been working with OV12 director Hannah Bannister on a new play Water Wings written by Isley Lynn.

Hannah Jarrett-Scott plays #25. Theatre credits include Pride & Prejudice (*Sort Of) (Tron Theatre); A Bottle of Wine and Patsy Cline (Gilded Balloon); Glory On Earth and Lion, The Witch & The Wardrobe (Royal Lyceum Edinburgh); Once This Is All Over We Still Have To Clear Up (Yellow Magpies/Edinburgh Festival Theatre); Janis Joplin: Full Tilt (Theatre Royal Stratford East & Assembly Rooms) and Midsummer Songs (New Wolsey Theatre). Television credit is Trust Me.

Sarah DeLappe's debut play The Wolves (The Playwrights Realm/NY Stage & Film/Lincoln Center Theater) was a co-winner of the Relentless Award and a finalist for the Pulitzer Prize, the Susan Smith Blackburn Prize, and the Yale Drama Series Prize.

Ellen McDougall is Artistic Director at the Gate Theatre. Previous credits at the Gate include Effigies of Wickedness (2018); The Tale of the Unknown Island (2017) and Idomeneus (2014). Other credits include Othello (Sam Wanamaker Playhouse at the Globe), the Lyric’s annual pantomime Aladdin (2016) and Cinderella (2015); The Rolling Stone (Orange Tree Theatre/Manchester Royal Exchange), The Remains of Maisie Duggan (Abbey Theatre, Dublin), The Glass Menagerie (Headlong), Anna Karenina (Manchester Royal Exchange), Henry the Fifth, (Unicorn Theatre), Glitterland (Secret Theatre/Lyric Hammersmith) and Ivan and the Dogs (Actors Touring Company/Soho Theatre) which was nominated for an Olivier Award. McDougall was formerly part of the Secret Theatre Company at the Lyric Hammersmith. She trained as an assistant to Katie Mitchell and Marianne Elliott. She was awarded an International Artists' Development Award (ACE/British Council) in 2012. Ellen is directing Dear Elizabeth later this year at the Gate Theatre.

LISTEN TO OUR CHAT WITH SARAH DELAPPE AND ELLEN MCDOUGALL