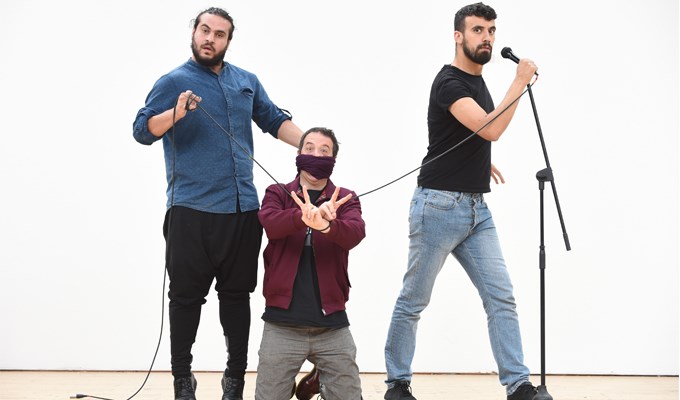 Mark Thomas: Showtime from the Frontline

Name the comedian who might say 'I wonder if I can set up a comedy club… in a refugee camp... in Palestine?'  Of course, it’s Mark Thomas.  And that is exactly what he tries to do.

Dodging cultural and literal bullets, Israeli incursions and religion, Mark and his team set out to run a comedy club and put on two nights in the Palestinian city of Jenin. Only to find that it is not so simple to celebrate freedom of speech in a place with so little freedom.

Jenin refugee camp, a stronghold for the al-Aqsa Martyrs' Brigade during the Second Intifada, is not a place synonymous with laughs. But it is also home to the Jenin Freedom Theatre and to people with a wealth of stories to tell.

Mark tells this story alongside Faisal Abualheja and Alaa Shehada, two performers, actors and now aspiring comics from the Jenin Club. This is a story about being yourself in a place that wants to put you in a box. Funny, moving and necessary. Mark says, it’s the nearest he will ever get to Alan Parker’s ‘Fame.’

Mark Thomas is one of the UK’s most effective and best-known political performers. He has won awards for his stage works Bravo Figaro, Cuckooed and The Red Shed including a Special Edinburgh Fringe Award for Outstanding Contribution to the Festival and an Amnesty Freedom of Expression Award. He is a one-time Guinness World Record holder for the most demonstrations in one day. For television his credits include The Mark Thomas Comedy Product and Dispatches. For radio his credits include The Manifesto. He has also recently released a new book Liar’s Quartet.

Faisal Abualheja is an actor and director from Jenin Refugee Camp in Palestine. He was part of the first generation to train and graduate from The Freedom Theatre Acting School. He has toured both Palestine and internationally and is project manager of The Freedom Bus, a project that brings cultural resistance to communities across Palestine.  Since 2012 he has been a Clown for Red Noses International and in 2016 he spent two months performing in Greek refugee camps.  In 2016 Faisal co-founded the Palestinian Laughter Liberation.

Alaa Shehada is a theatre maker who studied at The Freedom Theatre Acting School in Jenin Refugee Camp Palestine.  He is now part of Theatre Hotel Courage, an international theatre company that creates tragic comic shows with archetypical masks. He is a Clown for Red Noses International and a founding member of the Palestinian Laughter Liberation. He continues to teach at the Jenin Freedom Theatre.

Joe Douglas directs. He is a multiple Fringe First Award and Critic Award winner and is currently Co-Artistic Director of touring company Utter. Having previously been a Trainee Director at the National Theatre of Scotland (2007-8). As Associate Artistic Director of Dundee Rep his credits The Cheviot, the Stag and the Black, Black Oil, Death of a Salesman, George’s Marvellous Medicine, The Resistible Rise of Arturo Ui, Spoiling and The BFG (Dundee Rep). Other credits include The Red Shed (UK tour), Stand By (The Byre Theatre, Edinburgh Fringe Festival), My Friend Selma (Tron Theatre), Letters Home (Edinburgh Fringe Festival), Bloody Trams (Traverse Theatre), Dear Scotland, The Last Polar Bears, Our Teacher’s A Troll, Allotment (National Theatre of Scotland), Our House (Royal Conservatoire of Scotland) and Black Watch (international tour).