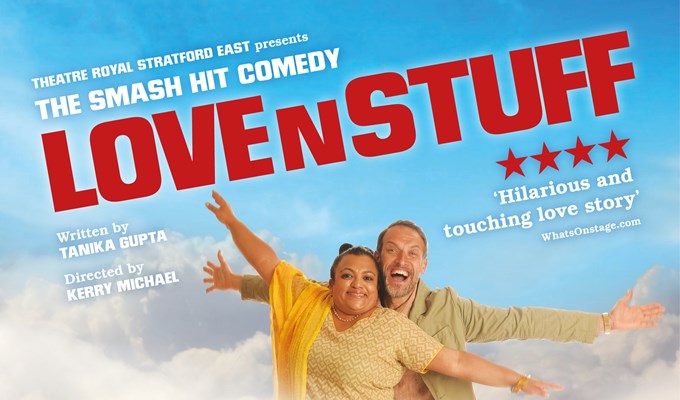 Award-winning writer Tanika Gupta returns to Theatre Royal Stratford East to debut her hilarious and uplifting new comedy Love N Stuff on the Main Stage - three years after its first successful run in the Studio. Love N Stuff audience favourite Rina Fatania returns to play the role of Bindi and will be joined by new lead Nicholas Khan in the role of Mansoor. This funny, fast-paced and engaging show sees two actors playing a breath-taking twenty characters and is set to have audiences laughing-out loud. Directed and designed by Kerry Michael (Artistic Director, Theatre Royal Stratford East) the show will run from Friday 3 June until Saturday 25 June.

Bindi and Mansoor have been happily married for thirty three years, but out of the blue, Mansoor clams he is tired of London, has packed his bags and vows to return to India.  Bindi however is determined to stay put and has assembled a whole host of friends and neighbours in an attempt to convince her husband to change his mind. Love N Stuff is a touching story looking at the hopes and disappointments of the East London couple as well as exploring their marriage, family history, friendships and their past and future.

Kerry Michael, Artistic Director of Theatre Royal Stratford East said: “I am delighted that we are working again with award winning Tanika Gupta on this delightful comedy to bring it to the Main Stage. In the space of an hour-Rina Fatania and Nicholas Khan do a magnificent job playing 20 characters with absolute flair and entertainment. Audiences will find it hard to resist this dynamic, loveable Stratford based couple.”

Kerry Michael has been the Artistic Director and Chief Executive of Theatre Royal Stratford East since 2004. During this time the theatre has been nominated for numerous Olivier Awards including Kerry’s production of Cinderella-the first pantomime ever to be nominated in the award’s history with other nominations including You Me Bum Bum Train and the remount of Oh What A Lovely War. His most recent directing credits include the John Adams opera I Was Looking At the Ceiling and Then I Saw the Sky (a co-production with the Barbican Centre); Cosh Omar’s Battle of Green Lanes and The Great Extension; The Harder They Come, Ray Davies’ Come Dancing; and the world premiere of Takeaway, the first British Chinese musical of that scale, and most recently the highly successful Christmas pantomime Robin Hood which had great reviews and broke Box Office records. Kerry will undertake a third season of Home Theatre in Brazil in the run up to the 2016 Olympic Games which will be followed by New Mexico and the West Bank in 2017.

After graduating from Oxford University, Tanika Gupta MBE worked as a community worker and in an Asian women’s refuge before becoming a full-time writer. She has written extensively for theatre and also for radio and television drama. Her work at Theatre Royal Stratford East includes Anita and Me, Gladiator Games and Wah! Wah!Girls -A British Bollywood Musical. Other Theatre work includes The Empress (Royal Shakespeare Company); Mindwalking (Bandbazi Theatre); Great Expectations (Watford Palace Theatre/English Touring Theatre) White Boy (National Youth Theatre at Soho Theatre) Sugar Mummies (Royal Court Theatre) and The Waiting Room (National Theatre). Her work for the BBC includes Doctors, London Bridge, All About Me, EastEnders and Grange Hill. Tanika was nominated for an Outstanding Achievement Olivier Award for Fragile Lane and adaption of Hobson’s Choice. In 2008 she was awarded an MBE for Services to Drama. She is currently the Dramaturg and lyricist for the Globe Theatre's production of 'A Midsummer Night's Dream' which runs until September 2016. Tanika has recently been elected as a Fellow of The Royal Society of Literature.

Tanika Gupta said: “Inspired by the play ‘Stones in their Pockets’ this laugh-out-loud production weaves together a cacophony of East End characters, eccentric neighbours and friends: a Northern gymnast, an Olympic refugee, a hippy masseuse, a football dad, and countless passers-by who get caught up in the drama. Love n Stuff is a heartfelt and hilarious play about love and what we call ‘home’.”

Theatre Royal Stratford East achieved 86% capacity last year, the theatre, known as a people’s theatre, encourages and celebrates its diverse audiences, by putting on shows that speak directly to them. Highlights include, Open Stage, where the theatre offered the public to help programme their season in a public consultation and engagement project, Home Theatre, which saw 30 one-person tailored plays performed in 30 different homes across London and Stratford East Singers, the theatres community choir, open for all to join which featured on BBC’s The Naked Choir with Gareth Malone.