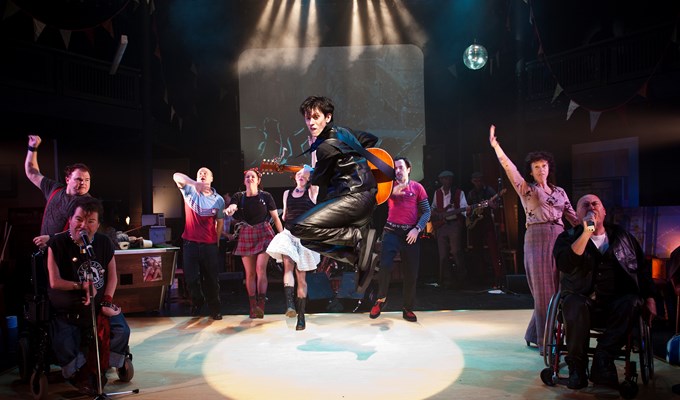 The pioneering disabled-led theatre company Graeae has confirmed tour dates and venues for the return of their acclaimed musical Reasons to be Cheerful, which will hit the road this autumn. Following a hugely successful tour in 2012 which was seen by almost 12,000 people and a series of concert performances last year, this joyful and defiant production will visit seven regions around the country, kicking off at the Belgrade, Coventry on 4 September and rounding off the tour with a two week run at Theatre Royal, Stratford East in London 24 October - 4 November. Book your tickets now!

First seen in 2010, Reasons to be Cheerful has gone onto play at theatres and festivals across the UK, in stadiums around the world, and even in front of HM The Queen. “Spasticus Autisticus”, the Ian Dury-penned disability rights anthem which features in the show, was performed by the cast at the London 2012 Paralympic Games Opening Ceremony and, despite being banned by the BBC in 1981, broadcast worldwide in front of an audience of over 1 billion.

This coming of age tale rejoices in the infectious and enduring music of Ian Dury and the Blockheads. Featuring stone-cold classic songs including Hit Me With Your Rhythm Stick; Plaistow Patricia; Sex and Drugs and Rock and Roll; Sweet Gene Vincent; What A Waste and the titular Reasons to be Cheerful (Part 3), this show is loud, bold and jubilant.

The parallels with the show’s 1979 setting are clear. Today, as nationwide cuts continue to impact on the lives of d/Deaf and disabled people, Graeae Theatre Company puts them centre stage. As a prominent disabled activist, Ian Dury was a patron and staunch supporter of Graeae. The extraordinary wit and wisdom of Ian Dury and the Blockheads music and lyrics are brought to life by an inclusive cast of 15 actors and musicians.

It is 1979. Labour has just lost the General Election to the Tories. Strikes rock the nation and Ian Dury and the Blockheads’ Reasons to be Cheerful (Part 3) is climbing the charts. Die-hard fans Vinnie and Colin are on a mission to see Ian Dury and the Blockheads play Hammersmith Odeon. With no tickets to a sold-out gig their journey throws more at them than they could have ever expected….

Jenny Sealey, Director of Reasons to be Cheerful and Artistic Director at Graeae Theatre Company, said: ‘I am beyond thrilled that our Reasons to be Cheerful gang are dusting off their Dr. Martens and going back out on the road one final time in a new production of our hit show, thanks to support from Arts Council England's Strategic Touring Fund. We will be well and truly raising the roof up and down the country with the brilliantly anarchic music of Ian Dury and the Blockheads, whose punk sentiment speaks louder than ever as we fight against the brutal cuts that Deaf and disabled people, and millions of others, have faced in recent years.’

Jemima Dury, daughter of Ian Dury, said; ‘I’m so excited for everyone who will see Reasons to Be Cheerful on this 2017 tour. You are in for a treat! It’s energizing, it’s moving and it’s enormous fun. It comes as close as you can get to a 1979 Ian Dury and the Blockheads gig. Graeae gives us diverse, accessible theatre at its best. This is how all theatre should be!’

Chaz Jankel, original Blockhead and co-writer of many songs in the show, said; 'It is amazing to think that 37 years after Ian and I wrote Reasons to be Cheerful (Part 3), the song still has such an impact and sounds so fresh. The Blockheads still perform it at every gig and the vibe in the audience and on stage definitely goes up a couple of notches as we lock in our reasons to be cheerful groove! The Graeae production has added a whole new lease of life to the song and legacy of Ian Dury. The extraordinary energy and skill that the cast bring to this original musical production is edgy yet heartwarming and mesmerising. The respect they have for Ian’s lyrics and lust for life is undeniable. If Ian were alive I am sure he would be laughing his head off and applauding the bravura of this very talented ensemble.'

An extensive community engagement programme will take place alongside this production, inviting original protest songs for a generation to be included in the show’s tour. For further information, email jodi@graeae.org

Jenny Sealey MBE
Director / Artistic Director of Graeae
Jenny Sealey co-directed the London 2012 Paralympics Opening Ceremony alongside Bradley Hemmings (GDIF). She has been Artistic Director and CEO of Graeae since 1997 and has pioneered a new theatrical language, coining the term ‘aesthetics of access’. Credits for Graeae include THE HOUSE OF BERNARDA ALBA, BLOOD WEDDING, BLASTED, THE THREEPENNY OPERA, THE LIMBLESS KNIGHT, BELONGING and REASONS TO BE CHEERFUL. International work includes ROMEO AND JULIET in Bangladesh, BLOOD WEDDING in Tokyo and BELONGING in Brazil. Jenny was awarded her MBE in 2009 and The Human Rights Awards for the Arts in 2012.
https://twitter.com/GraeaeJennyS

Paul Sirett
Paul is a playwright, dramaturg and musician. He is currently working as the dramaturg on the new Ramps on the Moon production of The Who’s rock opera TOMMY – a job that includes integrating two new songs from Pete Townshend and revising the script to make the production fully accessible. Most recently, Paul wrote Stratford East’s biggest ever selling pantomime, SIMBAD THE SAILOR, and worked as the dramaturg on a re-working of the John Mellencamp and Stephen King musical, GHOST BROTHERS OF DARKLAND COUNTY in New York. Previously, Paul was nominated for a Olivier for his musical THE BIG LIFE and he wrote COME DANCING with Ray Davies. Upcoming productions include a new Punk Rock musical, OXY AND THE MORONS, at the New Wolsey in Ipswich, and a new Graeae tour of Paul’s Ian Dury and the Blockhead’s musical REASONS TO BE CHEERFUL.