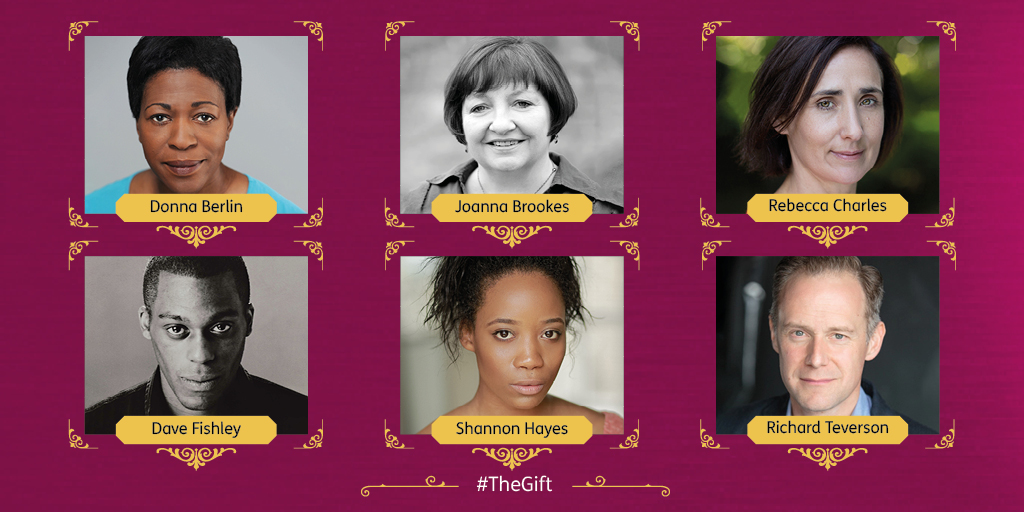 Eclipse Theatre has announced the cast and full UK tour for ‘The Gift’; the third theatre production from its ground-breaking Revolution Mix movement which is spearheading the largest ever delivery of new Black British stories on stage.

A co-production with the Belgrade Theatre Coventry, ‘The Gift’ opens in Coventry on Saturday 18th January 2020 before embarking on a national tour.

Set in both 1862 and the present day, the outrageously funny play explores themes of cross-racial adoption and cultural appropriation, partly inspired by the remarkable true story of Sarah Bonetta Davies; a young African girl who was adopted by Queen Victoria and raised in the Queen’s circles. Her story is juxtaposed against that of a second Sarah; a modern-day black middle-class woman staying in a Cheshire village with her husband and small child. The two Sarahs’ timelines are brought together when they meet Queen Victoria for tea, in a gathering which promises to be anything but a regular tea party.

Featuring a six-person cast, ‘The Gift’ has been written by award-winning playwright Janice Okoh (Egusi Soup for Menagerie Theatre/Soho Theatre, winner of the Channel 4 Playwriting Award in 2017;  Three Birds for Royal Exchange Theatre, winner of the Bruntwood Playwriting Prize in 2011 and shortlisted for the Verity Bargate and Alfred Fagon awards) and will be directed by Dawn Walton (Red Dust Road for National Theatre, Scotland; Black Men Walking for Eclipse Theatre; Salt for Selina Thompson). The designer is Simon Kenny, whose set design for Eclipse’s critically acclaimed ‘Black Men Walking’ represented the UK at the 2019 Prague Quadrennial, the international festival of theatre design, and featured in the V&A’s follow-up exhibition. Johanna Town, Chair of the Association of Lighting Designers, who recently worked on ZooNation: The Kate Prince Company's award nominated ‘Some Like It Hip Hop’, is the lighting designer. Adrienne Quartly, who also worked on ‘Black Men Walking’, also joins the team as composer and sound designer.

Writer Janice Okoh says: “I first heard the story of Sarah Bonetta Davies when I was at primary school, but for many years I wasn’t sure if it was actually true or not. As part of my research, I read personal diaries and journals kept by Queen Victoria and got a real insight into their incredible relationship. The theme of cross-racial adoption is a difficult subject to tackle, but the comedic elements of the play allow me to do this in a way that is playful, as well as thought-provoking. I also felt it was important to bring part of the story into the present day, as these are issues that are still relevant now.”

Sarah Bonetta Davies will be played by Shannon Hayes (As We Forgive Those for Oxford Theatre; Years and Years for BBC One; Cold Feet for ITV); Dave Fishley (Marat/Sade for Royal National Theatre; Bridget Jones’s Diary; Casualty for BBC One) will take on the role of James Davies, and Rebecca Charles (Abigail’s Party for Hull Truck; Doctors for BBC One) plays Mrs Schoen and Harriet. Donna Berlin (Princess and the Hustler for Bristol Old Vic/Hull Truck - nominated for ‘Best Supporting Actress’ at Broadway World Regional Awards 2019; Anna Karenina for the Royal Exchange/West Yorkshire Playhouse) takes part in her second Eclipse production in the roles of Aggie and Sarah; Joanna Brookes (Pride and Prejudice for Theatre Royal Bury St Edmunds; Much Ado About Nothing for Watford Palace Theatre) plays Harriet Waller and Queen Victoria and Richard Teverson (Richard III and Romeo and Juliet for Shakespeare’s Rose York; Downton Abbey for ITV) takes on the role of Reverend Venn.

Following on from the hugely successful second national tour of the critically acclaimed ‘Black Men Walking’, based on a real-life Black men’s walking group in Sheffield, and ‘The Princess & The Hustler’, inspired by the Bristol bus boycott of the 1960s, which toured earlier this year, ‘The Gift’ will be the fourth national tour to come out of Revolution Mix.

Stella Kanu, chair of Eclipse Theatre: “We’re thrilled to announce the cast and tour for ‘The Gift’. Sarah’s story is an incredible part of Victorian history that has been widely ignored; which is too often the case with Black British stories. The production comes hot on the heels of the success of the sell-out ‘Black Men Walking’ and the highly acclaimed ‘The Princess & The Hustler’, which combined reached audiences of more than 15,000. We look forward to sharing this incredible show with audiences across the UK and adding to the important body of work being created by Revolution Mix.”