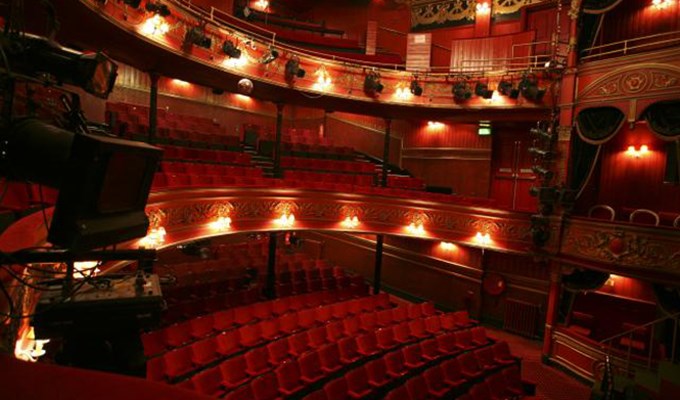 Works on the Grade II listed auditorium to include:

Theatre Royal Stratford East has announced details of a major auditorium refurbishment, following the award in February 2015 of a Small Capital Grant of £208,000 from Arts Council England and a further £5,000 from the Theatres Trust for repairs to the safety curtain.

Planned works include renewing all the seating throughout the auditorium, which will be carried out by established seating firm Kirwin and Simpson.  The upper circle will be restepped, and is being overseen by Tim Foster of the award-winning Foster Wilson Architects. Further we will be replacing the current bench seating with individual seats while the stalls level is reconfigured with the addition of an extra 17 spaces.

There will be floor repairs on each level, as well as installation of a new carpet throughout, which will replicate the current design but with a modern construction for comfort, strength and resistance to wear.

There will be major painting and plaster repair works carried out throughout the auditorium and this work will focus on the proscenium arch, the front of the Upper and Jean Brown Dress Circles and boxes.

The theatre is working to secure additional funding needed to complete all the required works. Information about how to support the organisation can be found by visiting www.stratfordeast.com/support-us.

The Victorian theatre was built in 1884 by Charles Dillon to the design of James George Buckle and first refurbished in 1902 by Frank Matcham. The last auditorium refurbishment was carried out over 20 years ago, with a subsequent major additional building programme in 2000. The current refurbishment will deliver a comfortable, revitalised and resilient space that will ultimately enhance the viewing experience for the future.

Kerry Michael, Artistic Director of Theatre Royal Stratford East said:  “We’re delighted to announce our major refurbishment plans for the summer. We have a beautiful Grade II starred listed Auditorium that is well used and requires a lot of maintenance. We are pleased to have been awarded £208,000 from the Arts Council to undertake this project, as well as a further £5,000 from the Theatres Trust to carry out repairs to the safety curtain. These works mean that we will be able to meet our audiences’ expectations of comfort and quality for years to come.

“We will be installing brand new seating and carpeting throughout the auditorium, as well as the re-stepping of our upper circle. During this period we will continue to have performances in different formats while our auditorium is getting a new lease of life.

“We also have our ongoing programme of events in the Theatre Workshop Bar including comedy events, music and open mic nights and spoken word artists. There’s something on every day and admittance is always free.

“We’re looking forward to unveiling our refreshed auditorium in early September with our autumn season which we’ll be announcing shortly”.

Overview of auditorium works to be carried out:

Further funding is needed to complete the total refurbishment of the auditorium and anyone wishing to support Theatre Royal Stratford East or any of its projects can find more information at www.stratfordeast.com/support-us.

The Summer/Autumn artistic programme will be announced shortly.

An important aspect of its work is the development of new musical theatre. The Theatre’s vision is to break new ground with musicals that bring contemporary and urban music into the mainstream of British theatre. This has led to the production of a broad spectrum of acclaimed sell-out musicals with its work transferring nationally and internationally. Recent productions include: The Infidel, Fings Ain’t Wot They Used T’Be, the Olivier-nominated Oh What a Lovely War (2014), the UK Theatre Award-nominated Glasgow Girls (with National Theatre of Scotland and Citizens Theatre in association with Richard Jordan Productions Ltd, Pachamama Productions and Merrigong Theatre Company (Australia)), Wah! Wah! Girls (with Sadler’s Wells and Kneehigh), the Olivier Award winning Pied Piper (with Boy Blue Ents), Britain’s Got Bhangra (with Rifco Arts & Warwick Arts Centre), Reasons to be Cheerful (with Graeae Theatre Company and New Wolsey Theatre), Clockwork Orange, Takeaway, Come Dancing (Best Off West End Production – What’s On Stage Awards), The Blacks, The Harder They Come, the Olivier nominated The Big Life, Da Boyz and Baiju Bawra.

Kirwin & Simpson have been providing first class auditorium seating for the entertainment industry since 1945. As a 4th generation family business dedicated to creating superior quality chairs and providing effective follow-up services, the company has grown into one of the UK’s leading auditorium seating suppliers.

They now support almost all the commercial London West End theatres and a wide selection of cinemas, theatres and concert halls throughout the UK.

Foster Wilson Architects has an international reputation for the design of cultural buildings for arts organisations, theatres, schools and universities. They are also undertaking a growing number of innovative residential and mixed-use developments.

Their work is characterised by a careful development of the brief, responsive design solutions and delivery of projects to time and budget. Many of their projects involve work to listed buildings, which require careful analysis, research based restoration and sensitive modern interventions. The practice has won numerous national and international awards.