The House of In Between

★★★★★
'... Thrilling and brilliantly written and produced piece of theatre... Drama, sass, and striking production, The House of In Between is a crucial and sensational show'
Grumpy Gay Critic

★★★★
'A story beautifully told with unabated passion where lies, love and life are taken by the scruff of the neck and given a firm shake'.
Boyz

The place is India and the time now.  Hijras are the third gender and they were once revered across Ancient Asia and Arabia.   In today’s world they still follow their old ways; living in Hijra ‘communities’ where they dance, entertain and earn their living bestowing blessings on newlyweds and new-borns.

Uma is the leader of such a clan in Patna, the second largest city in eastern India. She is determined to protect her House, the Hijras who live there and celebrate the millennia-old traditions of their way of life.  One day a stranger arrives in need of help and the community open their doors, and indeed their heart to help.  But this act of charity leads to an explosive chain of events that no-one could imagine, leaving Uma fighting to hold her family together at any cost.

With traditional Indian dance and music, the modern world meets mystical India in this brand new play that reveals the actions some people are willing to take to love, live and fight for life!

‘A ravish of sight and spirit: astronomical. You MUST go’
Grumpy Gay Critic 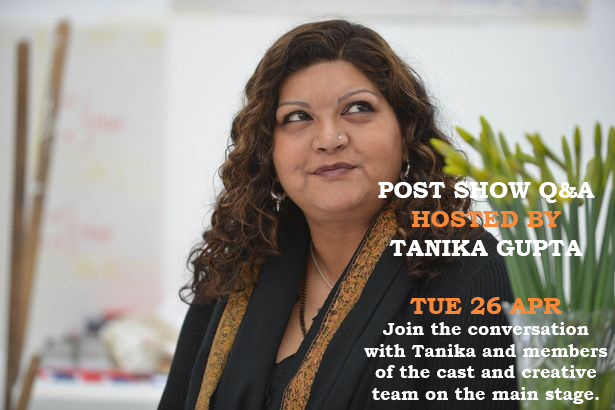 Join us for our Post Show Q&A session on Tues 26 Apr with Tanika Gupta on the main stage with members of the cast and creative team.

Theatre credits include Nadha, Tunnel, Cost of Eggs (Sandpit Arts), Point of No Return, Like Enemies of the Stage and Bring The Bucket (BeFrank Theatre Productions. Screen credits include Roots and Material Girls.

Theatre credits include Handle With Care (Dante or Die, UK Tour), Mind the Gap (National Theatre), To Like Or Not To Like (Park Theatre), Trafalgar Dreams (Theatre 503) and The Duchess of Malfi (Southwark Playhouse and tour).

Akash’s stage credits include (Renaissance Body RST (RSC). Screen credits include Sinbad (Sky 1) and Kids In Love (Ealing Studios), which will be released later this year.

Previous Theatre Royal Stratford East credits include Rashid in The Infidel The Musical. Other work in theatre includes playing Paul in the West End revival of A Chorus Line at the London Palladium, Angel in Rent (Greenwich Theatre), Prince Chululongkorn in The King and I (National Tour), Wicked (Apollo Victoria) and more recently Our Country's Good and Dara, both at the National Theatre.